Institute for Research and Applications of Fuzzy Modeling
University of Ostrava, Czech Republic 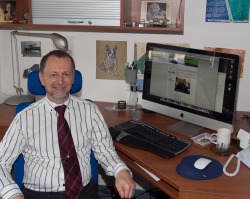 
Author or co-author of more than 300 scientific works. Known over 7000 citations of his books and papers.

He is the author of several formal theories. These became the foundation for the development of methodologies that are implemented and have practical impact.

His research activities in theory are focused on:

He developed the formal theory of predicate fuzzy logic with evaluated syntax. The results are summarized in the book Novak, V., Perfilieva I. and J. Mockor: Mathematical Principles of Fuzzy Logic, Kluwer, Boston/Dordrecht 1999. Furthermore, he developed a theory of higher order fuzzy logic. The seminal paper is V. Novak: On fuzzy type theory. Fuzzy Sets and Systems, 149:235-273, 2005. He also introduced special algebras called EQ-algebras. The basic paper is V. Novak and B. de Baets: EQ-algebras. Fuzzy Sets and Systems,160:2956-2978, 2009.

Development of methodologies and applications

He developed the special inference method called Perception-based logical deduction (PbLD) which makes it possible to mimic the human way of reasoning on the basis of information in natural language. The theoretical justification is based on the results mentioned in a., b. above.
His research activities in applications are focused on:

He has developed a methodology for process control on the basis of expert information (linguistic control). The principal method is PbLD. This methodology has many successful applications. The most advanced is control of 5 aluminium melting furnaces in the company AlInvest, Bridlicna, Czech Republic (see V. Novak and J. Kovar: Linguistic IF-THEN rules in large scale application of fuzzy control. In Ruan Da and E. E. Kerre, editors, Fuzzy If-Then Rules in Computational Intelligence: Theory and Applications, pages 223-241. Kluwer Academic Publishers, Boston, 2000).

He has developed a methodology for analysis, forecasting and mining information from time series using methods of fuzzy modeling, that are based on the theories mentioned above.

All methodologies and applications a.-c. are summarized in the book Novak, V., Perfilieva, I. and A. Dvorak: Insight into Fuzzy Modeling. Wiley & Sons, Hoboken, USA 2016.

He developed a prototype software that implements original algorithms for dealing with evaluative linguistic expressions, fuzzy/linguistic IF-THEN rules and the PbLD method. The software has been further extended to implement fuzzy (linguistic) control and decision making. The software is originally written in Borland Pascal. It was later on used as a standard for a new software which implements all the algorithms in C++. The latter software was written by the workers of IRAFM of the University of Ostrava.

© 2007 Institute for Research and Applications of Fuzzy Modeling, University of Ostrava, Czech Republic